Thanks to all of you who responded to my invitation to comment on early drafts of the text for my catalogue of paintings; here’s another few words about a land that is far from ‘dead’, but is indeed very ‘red’, and orange.

… the striated surface of the landscape appears like a vast skin pulled taut in the foreground that ripples and wrinkles as the mountains rise out of the ground and recede into the distance.

For any painter trained in the northern hemisphere, nothing can prepare you for the impact of Australia’s Red Centre. Instead of the shifting cloudscapes under which I lived in England and Scotland, here around Alice Springs the light has an alarming intensity. Shadows look like they’ve been hewn from the rock. Their purple density is scored into the earth as if incised with a metallic blade.

Along the MacDonnell Ranges, the gorges beat with a heat that is of its own baking. Around the plunge pools and waterholes the rock pulsates with a flushed blood-orange glow. Shadows emit their own light. Everywhere there is a harsh and uncouth beauty. Clambering high above the creeks, up the steep, chossy rocks veined with shining quartz, I am immediately reminded of the sea; ‘a savage sea whose mighty swirling waves of ochre and dark olive streaked with white were curling over, and just about to break, when they were frozen into everlasting immobility.’ 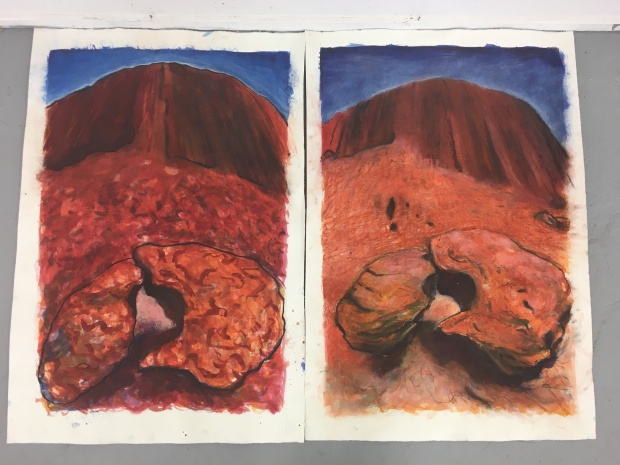 Several hundred miles further west, alert and indomitable, surfacing out of the flayed landscape is Uluru, an immense monolith of rusted rock, a supremely sacred place that defies conventional understanding. More than 1,100 feet in height and five miles round at the base it is almost beyond description in word or image. Under a piercing summer’s light, the Rock assumes the colour of dried blood, its surface pitted and pocked, streaked with black striations; its dents and caves speckled with hand-painted circles and outlines, proof that it is the temple of a living faith.

Nothing is as it seems. The immense scorched domes of Kata Tjuta some sixteen miles west of Uluru, are places of metamorphosis where ancient myth and legend is deeply embedded in every groove and chasm. Outwardly it seems to be an emptied place but that is not the case. Everything is named, every part is known intimately by the Anangu people who revere it as home to spirit energies from the ‘Dreaming’.

Stunned by the scale, the sizzle and the spectacle I take what shelter can be found, flick away the flies, and paint outward appearances, filling the crowded emptiness with layer upon layer of rusted orange and cobalt blue.

‘Australia is not a country from which a painter may easily learn’ wrote Cynthia Nolan in 1949, ‘for above all it is the changing colour of space which gives this empty land so intoxicating beauty.’

Sorry readers (I’m saying plural, but that’s only a weakly informed guess), I’ve been neglecting my blog. Apart from the one about the dog eating my notes I do have the best excuse – I’ve been introduced to Yammer. I’ve been implored to become active, which requires fearsome fortitude and earnest application. It also requires me to set aside my other pursuits. You probably don’t know, but I used to be keen on DIY: hours in the workshop, sawing and chiselling, a tool in each hand. As a hobby it was especially well suited to a rather solitary youth like me stuck in the tool shed and practicing to overcome a slight speech impediment that kept me a little isolated from my peers.

So now, instead of Hammering and Stammering, you can find me Yammering.

For today’s reading, I share with you here some texts that I’m drafting for a catalogue of recent paintings now well under way with my clever student group at The Bowen Street Press, under the expert guidance of Tracy and Cinzia.

Do feel free to drop me a note with any observations, typos, and other such edit; thanking you all in advance. 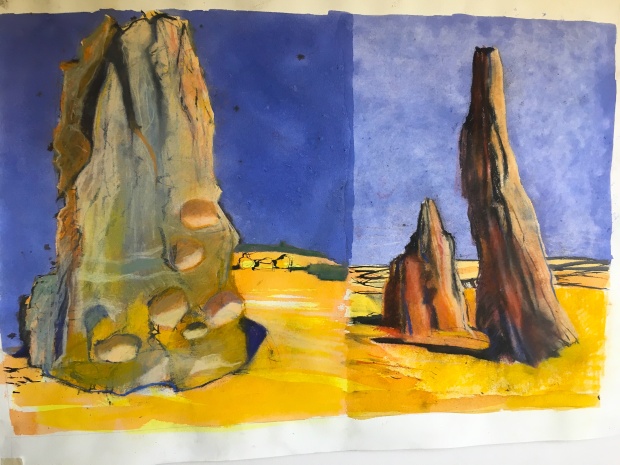 Spread across a vast tract of desert in Western Australia stand hundreds, perhaps thousands, of craggy conical stone pillars. Resembling jagged stumps of broken teeth, they poke out of the custard-coloured sand like steeples, like dented towers, like the fractured walls of a long-forsaken city. The Dutch crews who landed near here in 1650 described it so: an ancient metropolis lost to the sands.

Of course those European sailors were not the first to stumble across the pinnacles, nor were they the first to be wary of their haunting ambience. For previous eons the land was important to the semi-nomadic Aboriginal peoples who came to draw water from a chain of waterholes and caves that filled during the wet season.

Original custodians of the region are the Nyoongar: the desert there belongs to the people of the Yuat and Wajuk language groups. The angular course of the river that flows through the land each winter gives the region its name – Nambung, which translates as ‘crooked’. 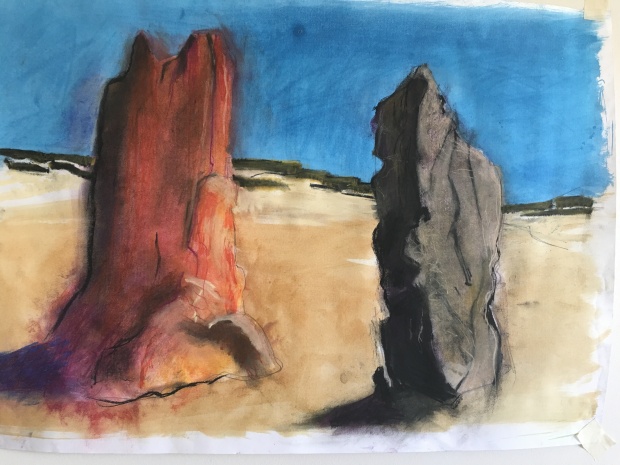 To paint and draw amongst these crowds of brittle conical stones is challenging. But in fact they are not brittle at all: they are tough fibrous rocks impaled in the earth. They appear to have traces of tree roots trapped in their cocoons of shelly limestone; they congeal as thick veins of toughened sand; jugular and aorta coursing through the earth.

This is but one of several theories devised to explain the geological mystery of the pinnacles. I am standing amidst a calcified forest, the elaborate casts of tree roots and intricate soil drains that over the eons have filled with wind-blown sand and petrified in place