I’m sorry for the long absence from your screens. It’s been weeks. Nay, longer. A month or more. It’s not as if I’ve been that busy, but I have been finishing a book: I’ve coloured in every page and didn’t go over the lines once. More about that later. My puny excuse: I have been taking part in a succession of events connected to the 100th anniversary of the end of World War One, the ‘Great War’ as it was known in the 1920s and 30s, before the next one came along and made everyone realise the pause between 1919 and 1939 had just been a moment to draw breath, recover and re-arm.

Last week many of us joined the remarkable team of Kirsten Haydon (from School of Art) and Neal Haslam (School of Design) and Elizabeth Turrell from the UK, to launch a quite stunning artwork marking the commemoration. A four-metre wide wreath made of over 400 finely enamelled and etched leaves, petals, flowers and fronds, lit up in a unique space under the vast Shrine of Remembrance. The impact is awesome, quite literally. Moving and monumental. Marked by a speech I was invited to give about the value of flowers in remembering.

We adopt the poppy as an emblem of remembering. And yet, how ironic. The poppy is from the opiate family. A drug more associated with amnesia, forgetting, the sleep or reason. Do we remember so that we can more readily forget, or do we simply forget once the intensity of commemoration is over? Cenotaphs and monuments are invisible for so much of the year, just another item in our over-furnished cluttered cities, props for the pigeons. And yet once a day every year, like the puya raimondii, they spring to short life, a floral aneurysm that bursts bloodily into our streets and into our consciousness.

Then we move on; we compartmentalise the memory and forget. In fact, talking of moving on, over the past few years I’ve been invited to speak at Great War centenary conferences, in UK in 2014, in the Dardanelles 2015, in Melbourne and Te Papa Wellington, 1916 and 1917; and in Macedonia and then Ypres in Belgium this big one-hundredth year. Some organisers asked me to be a bit provocative, to raise the stakes about why we choose to remember. Hence the draft titles of my papers: ‘Let me forget’, or even ‘Best we forget’. I argue that if war is about fracturing, destruction, the dis-membering of the whole, then recovery, recollection is about ‘re-membering’, the gathering and ordering of shattered parts into new shape and meanings. 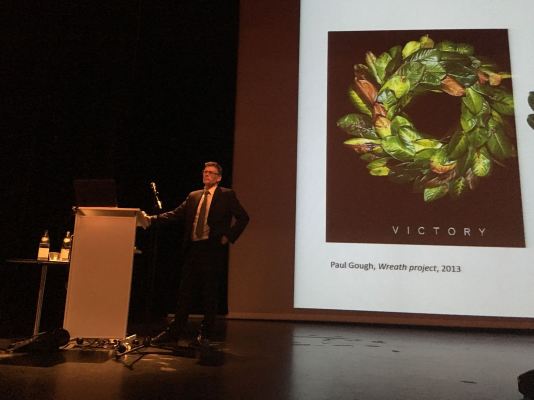 And the new book. A team effort with the wonderful students from Tracy O’Shaughnessy’s fine post-grad program in professional writing and editing. They’ve done all the proofing, the editing, the pictures, the design, even an index God Bless them. It has a snazzy title called ‘Dead Ground’ and a new word in the sub-title – ‘MemoryScapes’. Out soon, 208 pages, lots of colour pictures, and I haven’t gone over the lines once, well not often anyway.