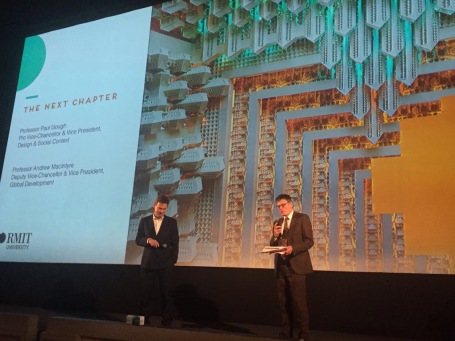 What’s your favourite Movie one-liner? Quickly now. Always be prepared. I threw this question at two staff colleagues a few weeks ago. I knew they were out there somewhere. Chewing on popcorn in the darkness of the front stalls of the Capitol Theatre.  They were expecting a show on the stage. Instead, there was I – and the entertainingly estimable Andrew Mac – asking THEM questions. Lisa was first to respond: a fabulous gutsy line from The Dressmaker. Kate Winslet steps gracefully from the carriage, turns to the ramshackle town she’d left years ago, and utters the memorable line: ”I’m back. [Pause for maximum effect] You bastards.” Need I say that the film came from the book written by fabulous RMIT alumnae Rosalie Ham, and the producer was none other than the equally fabulous RMIT alumnae Sue Maslin, who was one of my guests as I found myself a few Monday’s ago hosting a live RMITV show for Channel 31.

RMIT Alive is created, contrived, and produced almost entirely by our students. Dozens of them. Behind cameras, in front of cameras. Directing, messaging, editing, streaming, vision mixing, making tea, and the myriad technical trickery that’s needed in this modern age. ‘Have you ever done live television?’ I enquired, slightly incredulously, of the small team of final year Media and Comms students who sat in my office oozing youthful confidence a few days earlier. ‘A bit’, said one. ‘Enough’, said the other. ‘It’ll be fine’ assured yet another, ‘We’ve heard you’ve done plenty of telly in the past.’  Dear reader, should you have time spare you can watch it. The students were just brilliant. The floor manager was a legend. Without him, I’d still be there squinting at the autocue and doing my best to follow the talkback being whispered so expertly and firmly down my earpiece: “I repeat ‘Turn to Camera Two’. Please!’

From RMIT Live to Red Symons. An old adversary [and yet another RMIT alumnus!] whom I’ve encountered three times in the past 18 months. Somewhat surprisingly I’ve escape unscathed.  This time face to face in the studio, talking about the Founder’s Day gig in New Academic Street. I was up before the roosters. Live on air at some unearthly hour around dawn. Who listens to this stuff? Just before my turn, some guy from Sunbury rang in with a joke about the difference between a trampoline and a ukulele (though it might have been a banjo). So, who listens? Well, lo and behold, hundreds of you do, nay, thousands. People rang me up, sent me texts, stopped me in the street (well, not quite) to marvel at how I’d mentioned – in one 5 minute 11 seconds interview – ‘RMIT’ 21 times, ‘130th birthday party’ 18 times, and ‘our wonderful students’ at least 13 times. Red is famous for going off-piste, and sometimes taking it as well. His favourite line with me, once he’d stopped scoffing at my endlessly long official title, is ‘So tell me. Professor. Why is RMIT called RMIT and RMIT University? Why both. Isn’t one good enough?’ I employ the same reply I did last time; we’re so good we mention it twice. By this time though he’d moved on: ‘library, founder’s day, new academic street, yeah, yeah, keep going, you’re doing a good job …’. My briefing notes were perfect. My cues word perfect. Then I stuffed up the ending. I invited him along to the party. Even tried to sell him a ticket. Then in a slip of the tongue, I think I invited the entire population of the CBD. I said something garbled about ‘Sure, you can all join in. Come and have a Hot dog!’ A hot dog. Please. Rather retro? I know I’m getting on a bit, but a ‘Hot Dog’?. Not one of my best one-liners.

Back in the extraordinary interior of The Capitol Theatre, Andrew Mac had the best one-liners. He often does. ‘Why don’t you take off those wet clothes and slip into a dry martini’ is from an obscure Mae West film, and has been repeated by lesser starlets ad nauseam ever since. Mine was plucked from a list of the best 100 one-liners from the inimitable Woody Allen: ‘I don’t want to achieve immortality through my films, I want to achieve immortality through not dying’. A classic – rather like Red Symons really.

PS : For those of an enquiring mind, the following link may offer some escape from the everyday. Not for long though.